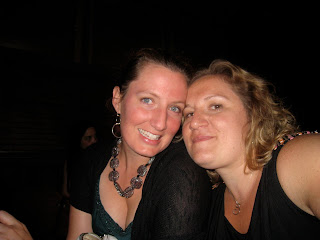 If you know me, read this blog or can even read... you know that I am slightly obsessed with Suzanne Vega. Earlier this year I blogged about my long and twisted sad story about missing concert after concert. Not any longer. Guess what I did last night!!!
So here is the story. I am signed up on the SV website to receive emails concerning upcoming concerts. The week before last, while on vacation, I received such an email. Much to my surprise there were two concerts listed in CT (the closest I can usually get is NJ or NY). One in Ridgefield and one in Norfolk. Since I was on vacation I couldn't really focus or get a handle on what dates and where these towns were. I was satisfied that they were in CT and after vaca was over.
When I got home from vaca and defogged, I once again noticed the email from SV. I quickly put an APB out on facebook if anyone wanted to go, especially my BF since we were canceled on last time. No answer. I texted another friend and tried to guilt him into going... he was busy. I therefore quickly considered this one another missed opportunity.
Until.... late Friday night got the "Someone posted something on your Wall..." Yes, BF wants to go and wants to buy tickets ASAP. Whoo hoo!
We made plans to meet up at Inifinity Hall in Norfolk, CT to see the beloved Suzanne Vega. Whoohooo!!!
The venue was totally awesome and the staff there was really nice. We had a little time to catch up before she took the stage. When she did it was mesmerizing. Everything I hoped it would be. She did a super sultry Caramel and played lots of greats. The comes intermission. We walked a bit outside, took the obvious pictures in front of the sign, walked back inside and noticed these gorgeous photos hanging along the corridor. 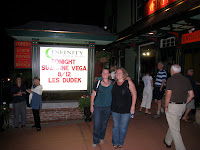 Really amazing stuff; Aretha, Ray Charles, Bob Marley, Jerry... we walked to the back the gentleman back there overheard us commenting on the gorgeous photos wondering what archive they came from. Turns out the announcer used to photograph for Rolling Stone and these were all originals. He is a great photographer. But it also turns out that the very nice gentleman was selling CD's and that after the show SV was going to be signing them. What what!!???!! We go back to hear the second set and it is better than the first if that is even possible. SHE PLAYED MY FAVORITE SONG. YES THE ONE THAT THIS BLOG IS NAMED AFTER. I ALMOST FELL OUT OF MY SEAT. The song is not that popular and it is really old so I didn't expect her to play it. I had already resigned to screaming it out during the encore... but she played it and it was AWESOME. 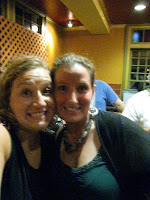 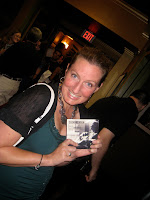 Needless to say we were first in line to get our cd's signed and BF told her the story about the canceled concert and we were way to excited for her. Check out the pics. 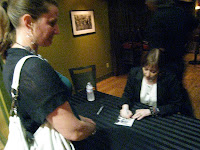 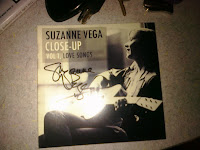 Cool... I'm so glad you finally had the chance to see her live! I saw her in a much larger venue last month, and it was every bit as magical.

I see you're subscribed to the tour announcements from Suzanne's site, but you're not a member of Undertow (the message board). You should really check it out, and people there would love to read all about this show and your ideas about her songs!