Dear Calliope,
Today is your first birthday. I can remember the first moment I saw you and thought wow, you're here I am so happy and now what?! Haha. Instead of crying you squeaked. It was so cute. The rest of that night was such a blur and the moments were so fleeting and they took you away so quickly because I wasn't feeling good and I kept wondering where you were and when I would see you again.
The doctor came to meet you that morning and asked me if I had inspected you yet and I was so surprised to say no. When you were finally in my arms again I couldn't stop staring at you and whispering to you how long I had waited for you and to tell you how amazing you were that I hadn't had the chance to check you out. The doctor and I inspected you together; every inch and fold and crevice. It was confirmed that you were perfect.
Every day you continue to amaze me. Your smile, your coos, and now your words and games. Every day my love for you grows although I can't imagine that I can love you any more. Lately you have been waking me up by saying mama and giving me kisses, nothing makes me happier. Seeing your smile and getting your kisses is the BEST way to wake up in the morning. You are so happy and confident and fairly easy to please. You love daycare and the kids and daycare providers love you right back and that makes this mama happy as can be. I know that you are in good hands and showered with love. This family can't get enough of you. If they aren't around or can't get to visit you in person we have lots of FaceTime visits full of love and smiles and kisses. You talk/babble up a storm and are always ready to ham it up for FT. It's a love fest.
I love you so much. I love our time in the car when we can chat and sing and listen to music and just be plain silly.  Last week when we visited the park and you had your first swing I envisioned the summer and what fun we have in store. You are amazing! Can't wait for dips in the pool this summer and running around the sprinkler and more trips to the park.
Love you,
mom
Posted by Stefania at 6:44 AM No comments: 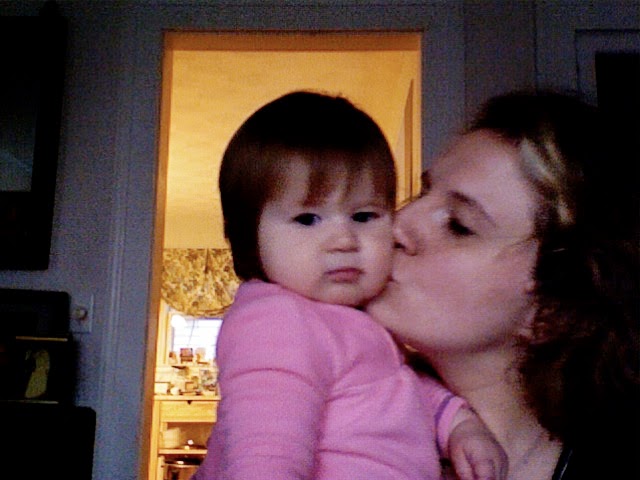 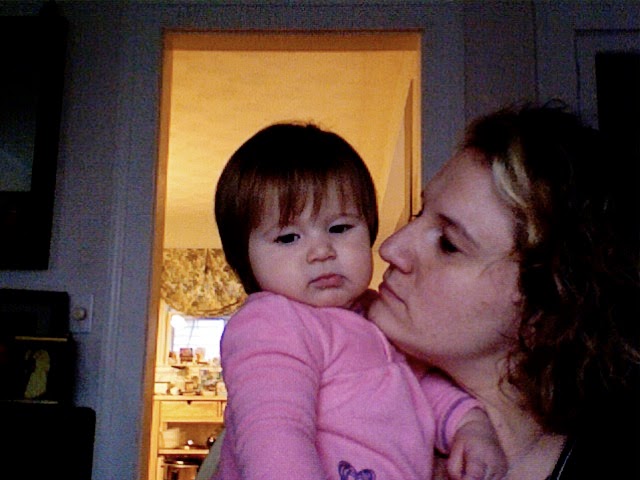 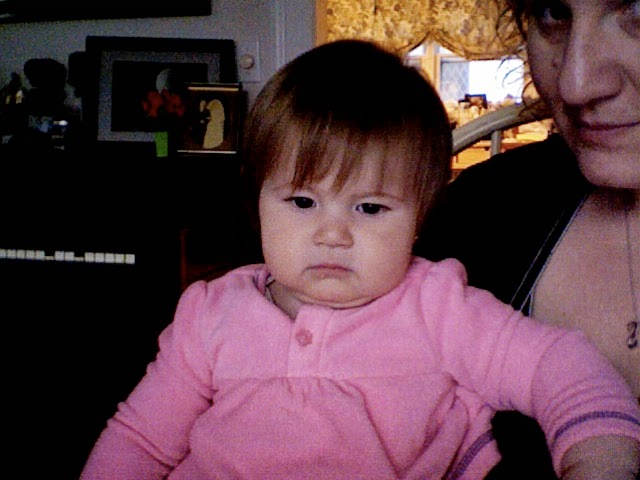 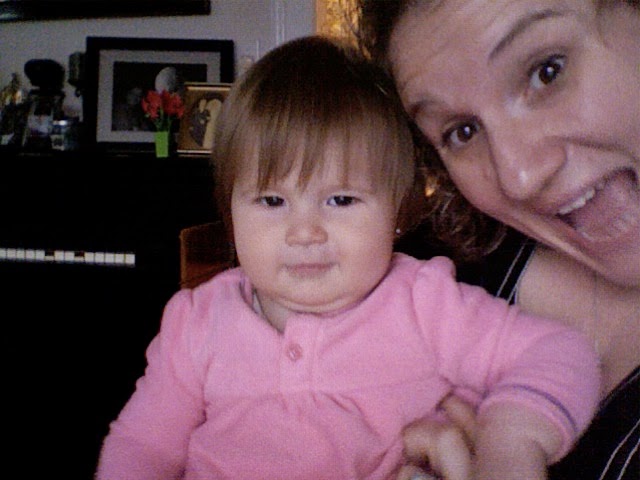 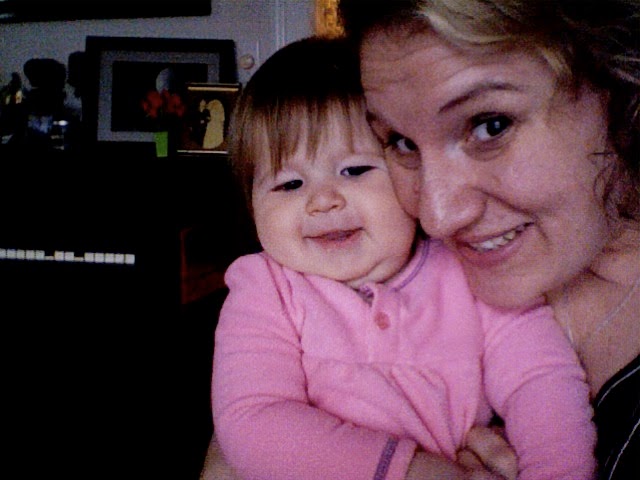 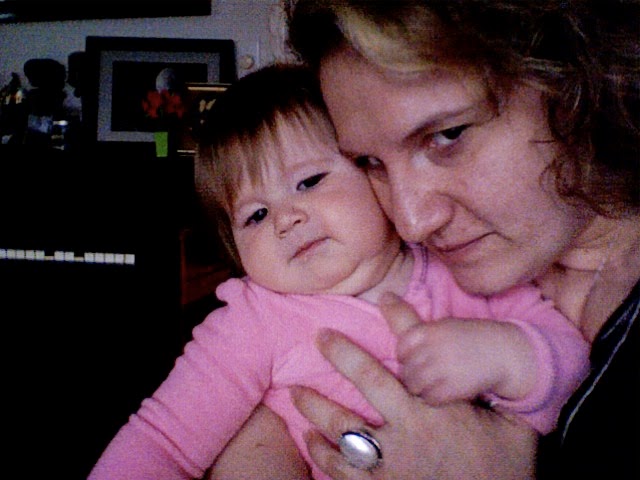 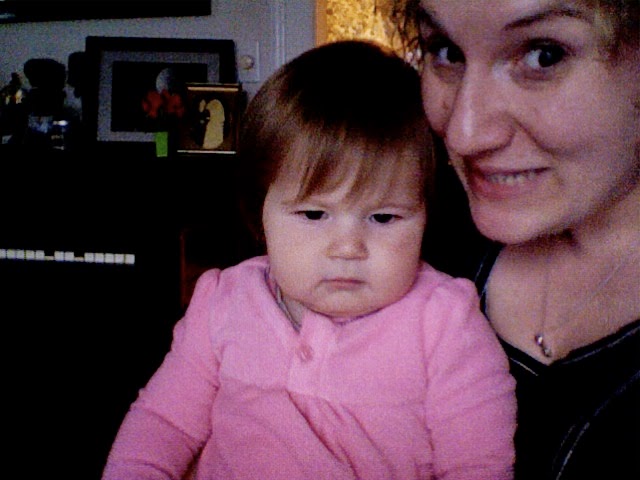 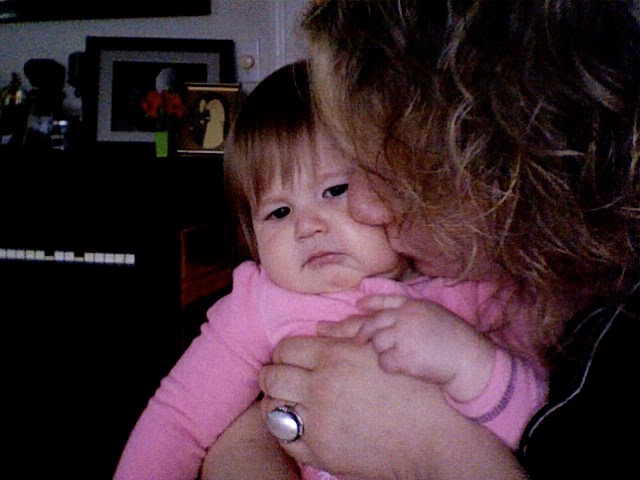 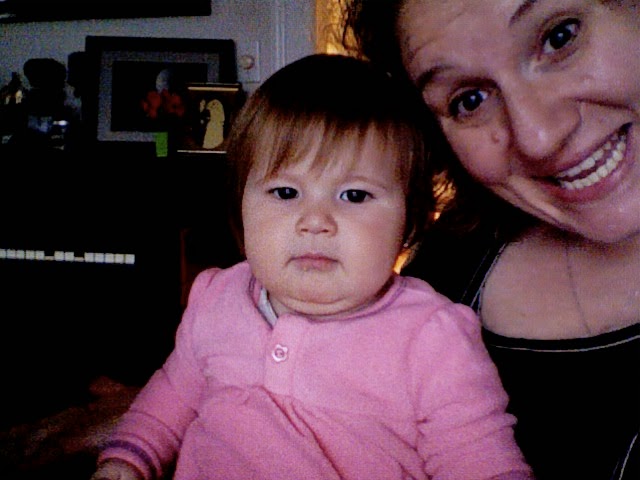 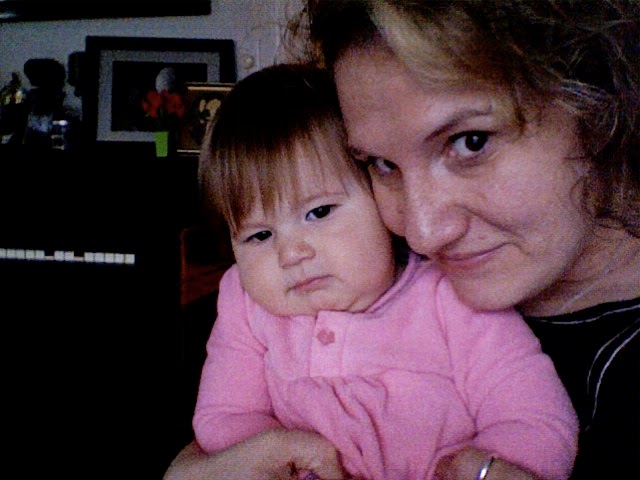 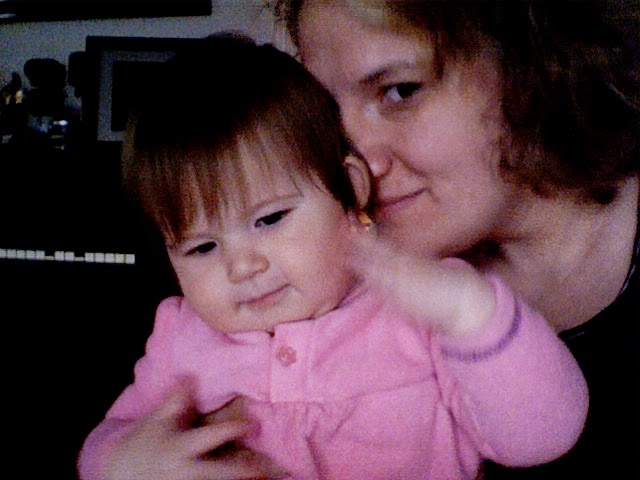 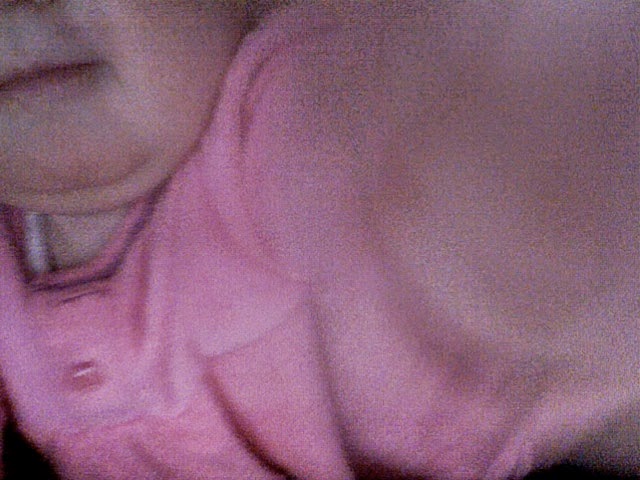 Posted by Stefania at 6:21 AM No comments:

Wonderful start to the birthday week! 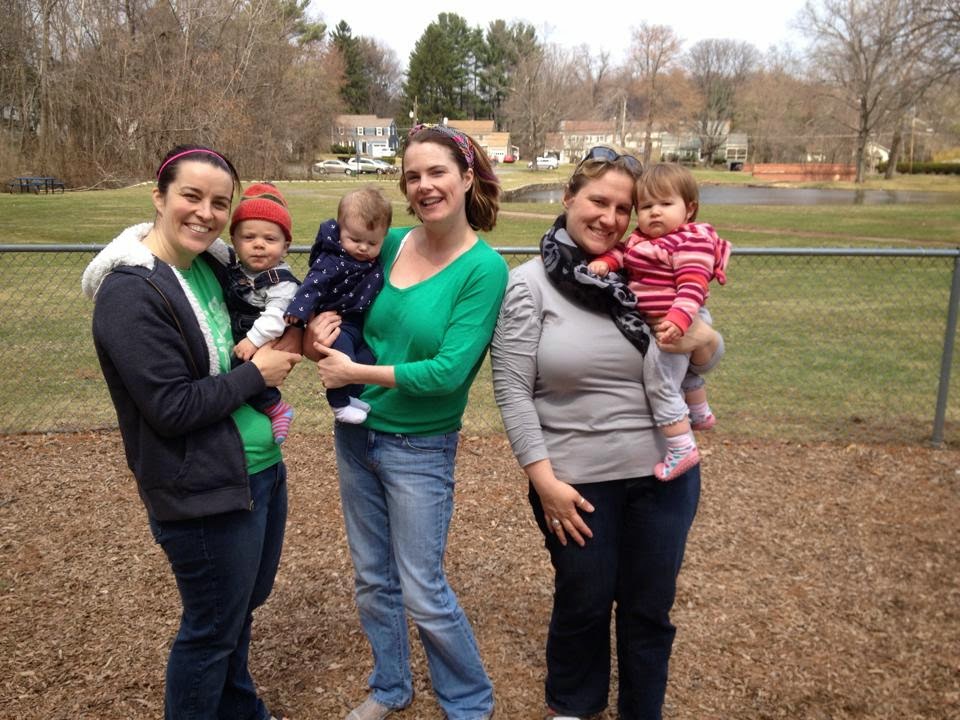 Friday afternoon there was a power outtage at work so I came home early to finish up some emails and got to pick up my darling. I cherish that kinda stuff so much because I see and feel time speeding up and running away. Hubby took Calli to the grocery store with him so I could do some more work and try to pick up a bit around here. We had a great dinner and off to bed. Saturday was filled with gym, visiting my mom at the salon to get my eyebrows waxed, a visit to a family friend that is housebound, and hanging around the house while we got some stuff done. It was so chill and amazing at the same time. Every day this past week I have looked at Calli and just noticed in different ways how quickly she is growing and moving out of the baby stage. She took a step the other night and yesterday stood up from sitting, usually she has to pull herself up on something. She is so proud of herself in those moments and I am so so so proud too. Today we had a playdate with some ladies from the office that have had babies in the last year as well. We had fun watching them all play together and talked about the different stages we are all in. We walked across the street to the park and Calli went on the swings for the first time. It was so fun and special. Afterward we came home and napped and read for a little while and then spent the afternoon playing and trying to get some homework done. All in all a wonderful weekend and perfect start to a awesome birthday week.

My last post was just the beginning of the worst 5 days of the past year. It trumps all the sleepless nights, the major poops, even the pushing of labor and waiting to meet my bestest gal.
This stomach bug has taken my family hostage and tortured us in ways this Mamma was not quite ready for*.
I was not ready for a stomach bug, or any bug really. Calli had a temp a few weeks ago but even that was so slight and she was over it before it really began. I was convinced that Calli was invincible... I knew deep down in my heart that I was kidding myself but I was enjoying while it was true.
It started Wed night and I truly wasn't convinced that it was a stomach bug until I called my daycare provider to tell her that Calli had gotten sick the night before and would be staying home and she told me that Calli wasn't the only one. Two kids had already gotten sick and it seemed like it was hitting everyone.
I thought we were doing well until about 4:30pm on Thursday when she got sick again. I got ahead of myself and was convinced the bug had taken it's toll and I probably fed her too much, or so I told myself. Calli had been "spitting" up all day. She had not been producing any wet diapers and I was really concerned about it so I called the dr. She said that if we didn't get one by 9pm to head into the emergency room. We were really nervous and of course she didn't have a wet diaper so in we headed. After we got there and waited for about 30 minutes we were seen by the triage team and they were surprised that the dr. sent in. She was a very happy baby and had wet lips and was not showing any serious signs of dehydration. Of course when they went to take her temp her diaper was nice and wet. We decided to take her home instead of waiting in the germ infested waiting room to get confirmation from the doctor. In that moment I realize that I know better than books and doctors that are giving me diagnoses over the telephone. I was pretty sure we were ok but when a dr tells you to head into the ER you go. I wasn't upset with my decision it just helped me to be a better mom.
Friday I stayed home again because I didn't want my colleagues to get sick and Calli was still staying home. She seemed to be doing better so I fed her a banana as well as some pedia-lyte. Again she was doing great until about 3:30p when she tossed her bananas (so to speak). Grossest moment EVER. Until of course you add in the toxic poops. DANG that was some stinky nasty mess.
Saturday was liquid only and that had to be the worst because we had to limit her liquids as well. She was crying from hunger, pain, being pissed off... who knows. It was hard to watch. Saturday night I really felt like she had turned the corner and we all seemed to be doing better. At about 11:30pm I got sick and was sick again first thing in the morning. UGH. That was the worst. Hubby had the other half of the business and we were all down for the count on Sunday. In the AM I tried giving her a cracker and she spit that up too and I figured she just wasn't ready for solids yet so we did another day of torture or liquid diet. She HATED it. So did I. I was breastfeeding but only for a few minutes at a time and to both of us that was torture!! By Sunday evening we were all sick of each other, sick of the liquids and just plain sick of being sick; so we got better. To play it safe and make sure that we could all take solids again we stayed home on Monday and did just that, tried getting back to a diet of solid food, washed every thing that had come in contact with the bug and tried to enjoy ourselves... and that we finally did. The moral to this story is STAY AWAY from this damn bug!!!

*this is really dramatic.... but it really truuly was terrible!!

So that wasn't the end of it... Tuesday night while Calli slept she got sick again. I was horrified and bewildered and couldn't quite understand... she had done so well for a few days. UGH. So I stayed home again (for those keeping track 4th day off of work) and took her to the doctor because I was just so crazed at that point and wasn't sure what else to do. So to make this super long story a little shorter; we were dealing with a potential 7-10 day bug and there was lots of opportunity for it to rear it's ugly little head after a couple of days of things going well. There is a fine line and no way of knowing where it is; it's all just trail and error. The good news is that she was well hydrated and I was doing all the right things... just keep doing what you're doing and go slow was the answer. UGH. Glad that I was doing the right things hated that there wasn't a quick fix answer. She did great the rest of the afternoon, went back to daycare on Thursday and hasn't had another occurrence since. The really sad news is that when they weighed her she lost all the weight she had gained in the last 3 months and probably won't get back on track for another couple of months. :(