This weekend has been pretty laid back. I met with the "adventure book club" at Perk on Main in Durham. The adventure was crepes! One of the families in the book was french so we had crepes for lunch. Then I headed to my sister's place to hang with the kids and help my niece get ready for her "someone special" dinner dance.

Ciao
S
Posted by Stefania at 11:58 AM No comments:

Here are the pics from last book club and lecture. 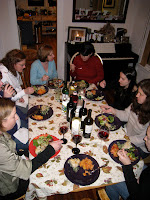 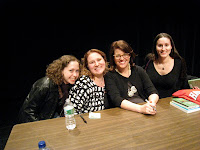 We ate delish spinach pie and polenta. So yummy.

We have been blessed with some super amazing weather this weekend. Hope that it is indicative of the weather we will be getting and not some crazy fluke. It is New England after all and you never can tell!
I am trying to get all my cleaning and tidying up so that I can go for a walk. Yeah! We'll see.
I have had a super awesome weekend so far and I don't want it to end. I was so tired Friday night. I came home ran straight up stairs to change into some comfy clothes, warmed up some yummy leftovers and deposited myself on the couch. Ahhhhh..... so nice.
Saturday was filled with fun fun fun. Hubby and I went to visit my mom at the salon where she shaved his head with a straight razor. My hubby always has his head shaved but every now and again he wants an old fashioned straight razor shave. Afterward we went to the grocery store and battled the lines. Dang... two weeks in a row I went to the store in the midst of crazy weekend shopping. Hate it! Back to the house for some unwinding, then DATE NIGHT. We aren't the weekly date night type so when we do designate a date night it is always fun. Originally we were going to a bar to see a band... those plans changed so we were on our own. My ipod has been screwed up for awhile so we went to the .... MALL. We are both mall haters. Not so strong on my end because after all I do know that mall=clothes and makeup and shoes.... but not a fan. The store was jam packed but I was able to recycle my old ipod and get a spiffy new purple one! Love it. Then we ventured to the jewelry store to replace a ring that hubby has beat to heck. He is really hard on jewelry.
Last but not least we were walking back through and hubby saw a hat that he liked. I must preface this story with the fact that hubby really REALLY loves hats but he has the biggest noggin and it is NOT easy to find his size ANYWHERE. So... the fact that he saw a hat in this particular store... I was already chuckling to myself because this is the type of store that doesn't really carry large sizes. We walked in, walked around and I expected to walk out... but hubby found a hat, popped it on his head and.. it FIT. Not only did it fit, but it was BIG. I started laughing; uncontrollably. It was just so funny that we happened to be in that store and found a hat that fit and looked great on him. The icing on the cake was that it was on sale and only cost $15. I mean HILARIOUS!

Last night was the much anticipated lecture by Kelly Corrigan at the University. It was my first big lecture in Lincoln Theater and with an author. To have it be Kelly Corrigan was the icing on the cake. I have been a fan since the first time I saw Transcending on Youtube. I don't know when it was, but I remember it. Once you see it you won't forget it, but you will watch it more than once. It was so touching and moving. When I got here and learned that I would be involved in this lecture I was ecstatic. To top it off I introduced the book to book club and invited them to the lecture as well. My mom was there with her best friends and my best friend made it too! Everyone had a great time.

She was an inspiring speaker, she made us laugh and cry. I was lucky enough to spend some alone time with her and she is one of us! She is down to earth and easy going. One of those people that you instantly want to be friends with. She invited me to friend her on facebook… it's official we are BFF.
Ciao
S
PS. Thanks to all that joined me! Hope you had as great a time as I did.
Posted by Stefania at 4:41 PM No comments:

Yay. MARCH!
I am so glad that we are getting closer and closer to Spring! This morning even smelled a little like it. I heard birds chirping and the sun was shining. The days are longer. There is so much to be happy about.
Last week and last night were a doozy of a week.
This week I am excited about a lecture on Thursday night.
Kelly Corrigan is coming to speak at the University. I read her book, have watched pretty much every video available of her online... and I get to be her escort while she is at the University! Hello! Super exciting.
So, if you are in the area and able to join... you can reserve tickets at 860-768-4228.

Hope to see you there.

Ciao
S
Posted by Stefania at 8:13 PM No comments: