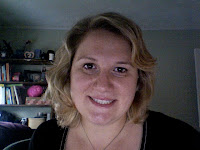 They are emptying an office on campus and selling off all the stuff they don't need. I scored a new desk chair for hubby and me.
The pic is me in my new chair? How do I look?

PS. TGIF and have a great weekend!!
Posted by Stefania at 6:15 AM 2 comments:

Today is a beautiful day.

Started out clear and crisp with a snap in the air. The snap that means that school is starting soon. Not sure why, but there is always one day around the time that hubby goes back to school that is like this, surely it will go back to HHH tomorrow or over the weekend and then not come back for a month. But it is almost like mother nature knows and wants to show that school is BACK ON.
I know hubby hates when school starts again but I secretly (guess not so secret anymore) love it… and not for the reason you think. I love our few minutes together in the morning, I love the smell of coffee being brewed by him, when I get out of the shower; it is the same maker and same coffee but it tastes leagues better when he makes it. He used to bring it to me in bed; but I had to stop that because by the time I got out of the shower it was already too cold. I love the small chatter that we share and then of course the “have a good day, I love you” hug and kiss, beats all!

After indulging in coffee and toast we made our way down to Standard Bakery, where Jeff works. I don’t even walk in anymore because I am convinced that there are calories and butter molecules floating in the air. There is (among many believe me) a sweet that is leagues above the rest; fancier (I think it is spelled, and pronounce with a flair). They are a cross between a cookie and a dense muffin; they have almond flour and dark chocolate pieces… YUM. We had to have one to start the day.
From Standard we walked along Commercial Street to a really gorgeous gallery that had some of the most beautiful jewelry. Robin was kind enough to explain every piece and even let me try on the $9k ring. The boys went their own way and we finally met up with them right around lunchtime at Duck Fat (I assume it’s two words but it could be one, but it doesn’t matter). We have been hearing about Duck Fat forever and were so excited at the opportunity to try it out. The place is tiny.

You can kinda see behind Jeff how small it is. Tiny isn’t even the word for this place. But the food was UN-BEEL-EVE-ABLE. The French fries are fried in … what other… duck fat. There are truffles in the ketchup. They have milkshakes with real full fat ice cream. And the panini’s are really good too. I’m sad that I didn’t try the beignets. For lunch I had the GBT- Goat cheese, bacon and tomato panini, hubby had the cubano – ham, pulled pork and bread and butter pickles and of course we shared a large fries.

They also make their own soda, hubby had the root beer. I didn’t order a milkshake but Judy did and it was heaven through a straw, so creamy and cold but not icy. You have not had French fries until you have had their ff. You get a choice of dipping sauces to go with them; we tried the truffle ketchup because come on, when will you ever again find truffle ketchup, the garlic mayo. I went so far as to sprinkle some malt vinegar on mine… DEE-LISH. I will return to Duck fat and try everything else on the menu and get a side of those awesome fries every time.
So suffering from food coma at this point we walked back to the hotel, stopping at a few stores along the way decided to separate so that they could secure their babysitting and so we could relax a bit before dinner.
A few days before we arrived Judy asked me to choose the restaurant. She sent me the names of three restaurants and I couldn’t decide. They all looked so amazing. One better than the next. So she suggested her favorite restaurant and what an amazing choice it was. Vignola' sits on a side street near Commercial. The front of the restaurant is covered in vines and I was so happy as we were seated in the window seat. The wine and cocktail list was great. I ordered an orange basil mojito topped with prosecco, it tasted just like orangina, delicious. 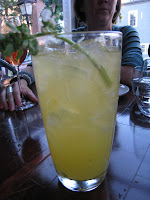 Vignola’s pride themselves on local food from the lettuce to the steak. Most of the menu indicated locally grown food. The most impressive part of the menu was the cheese list. Covering exactly one half of the menu was the cheese list to rival all cheese lists. How could we not indulge. We ordered taleggio, manchego, goat and a local buttercup. One more rich than the next, so creamy and sharp; being the cheese lover that I am, I as in heaven. I ordered a red and green lettuce salad as an appetizer with local honey as the dressing, it was sweet and not over dressed, exactly what I wanted. For my meal I had swordfish steak over a bed of peashoot risotto and grilled zucchini and squash. The risotto was the star of the dish, perfectly cooked and seasoned and the peas were amazing and tender. The grilled veggies being the runner up perfectly cooked and dressed in very light oil. My first bite of sword fish was a little dry but turned out to be the only one. The swordfish was moist and tender and perfectly seasoned. The meal was stupendous. One of the best that I have had in a LONG time. The only dark spot in the evening was the service; although she was smiley and got everyone’s order right (except forgetting the fig bread at first) it was so slow. We were there for 2 and half hours and when we got there the restaurant was more than half empty. But honestly I can over look that in light of the amazing meal.
Whoa. I thought the first part was long…. Anyone still reading?
After the amazing dinner we went back to the Eastland Park hotel to have a drink on the roof top bar. The view was great and the drinks were plentiful. Sunday we woke up late had some breakfast in the room and finished a perfect weekend off with a visit to our friend’s place. Great weekend. Yay!
Ciao S 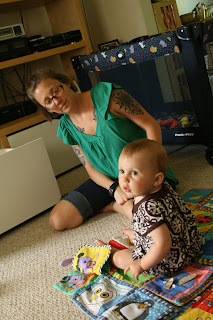 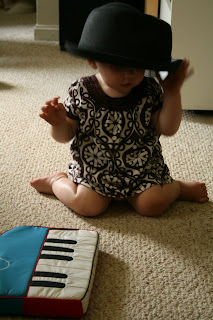 Posted by Stefania at 5:18 PM No comments: 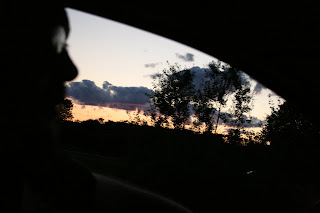 We finally had a weekend away... a week ago.
We went to our favorite city to the north… Portland. Plus it means we get to visit our favorite baby… and family. We literally ate our way through the weekend. We haven’t always been so foodie about it but this time was different.
We arrived Friday evening about 9, checked into the hotel (we stayed at the Eastland Park, we usually stay with our friends but being that this is probably the only weekend we will get away we decided to splurge) and immediately went out to eat. We purposely didn’t eat before we left so that we could get on the road sooner. I spent some time the day before we left looking for restaurants near the hotel and narrowed it down to Katahdin (I couldn’t pronounce it either, it is named after a mountain in Maine, like I was supposed to know that) [kuh-tah-dn] and 555. We chose Katahdin because it was literally across the street from the restaurant and it sounded interesting. I called first to try to make a reservation and they don’t take any, when we got there it was pretty clear that at 10pm you don’t need a reservation. I had a super delish blueberry martini; it came with a sidecar in a small bowl of ice, basically two martinis in one. For appetizer we enjoyed steamed salmon dumplings; in a really thick soy sauce and some slaw on the side. The salmon was really lite in flavor and paired with the slaw made a perfect bite. For dinner I had lightly breaded flounder in a beur blanc sauce over mashed potatoes and roasted asparagus. Hubby had grilled lobster over fettucine. I tried the lobster and fettucine and was not blown away. I thought the lobster was a little dry, the pasta was overcooked and the sauce was very thick. My flounder was good; flaky and not over breaded. We did not have dessert, the blueberry martini was enough.
Saturday morning we met with Judy at the famed Arabica; one of the great little coffee shops in the area. We always go and I always love it. The coffee is wonderful as is the various treats that they sell at the front desk. I was tempted by the sticky pecan buns but I was good and ordered a triple cappuccino with an order of toast. This may seem simple to you but if you’ve ever spent any time in Portland or know anyone from Portland, toast is not that simple. There is a “guy” that makes this toast daily and deliciously from scratch … the toast of the day was “dirty toast” regular white flour toast with a scoop of wheat thrown in to make it dirty. YUM. I am a huge toast fan. It was lightly buttered and I shared it with little Liv, she loved it too. Whew… this is only the beginning. More to come.
Ciao for now.
S 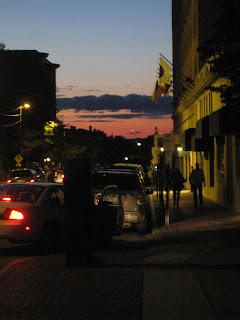 Posted by Stefania at 5:11 PM No comments:

Well it is the fateful Sunday afternoon... almost Sunday night. When all thoughts of fun and carefree are headed out the window. It was a great weekend. Today was a bit too lazy for my taste but I just couldn't get myself in gear. Gotta do some laundry so we'll see how that goes.
Yesterday was one of those perrrfect Summer days... Hubby and I and two other couples took a day trip to Providence, RI. We walked around for most of the morning, got a snack in little Italy, attempted a trip to the Providence Place mall and then walked to a nearby Brewery for some much needed food and relaxation. If you have ever been to the Providence Place Mall you know when I say that place is HUGE! It is not a mall to run into or just spend a little time in... it is a commitment. One that our group was not quite ready to make, and I for one was glad for it.
When the day was done we all went our separate ways and reconvened on our deck for some much needed reflection on the day and treats for all the walking around we did.
It was a gorgeous evening...except for the mosquitoes that would NOT leave us alone.
Today was a soggy rainy Sunday where the motivation was lost.
Hope you had a great weekend too!
Ciao
S
(pics to come)
Posted by Stefania at 3:14 PM No comments: