I know that I have mainly posted about Calli lately, but wouldn't you? She is ADORABLE!!!
So this is my attempt at not only blogging about my beautiful daughter...

I have been trying to write this post ALL WEEK!
Monday we had our one month appointment.
Calliope is doing GREAT!!!
The stats are as follows... She weighs 10 lbs. 10 oz. and is 20.25 inches long.
I've noticed that she is a lot more alert lately and is more likely to catch your gaze. She crosses her eyes when you get real close and it is adorable. She is starting to coo and gurgle a little too. She is still eating like a champ and soon we will start to introduce a bottle into the mix.
I'm starting to tell the difference between the "I'm tired" and the "I'm hungry" cries. 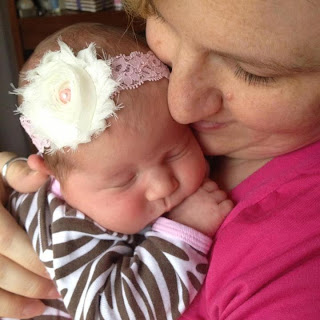 Calli is two weeks old and is growing strong. Wednesday at her doctor appointment she weighed in at 9 pounds. She is almost official turkey size!
Wednesday was a big day out for us. Lots of first. We had an appointment at hubby's work to fill out some paperwork, then a visit to school followed by a doctor appointment. Long day out. I tried feeding Calli under the nursing cover for the first time and she ended up vomiting the full contents of her stomach all over me and her. I was afraid to feed her for the next couple of hours, so she really probably weighs more but was on a super empty stomach.
The posts are few and far between because I can't seem to get my self together enough to sit down and post. I can't believe that the days are flying by so quickly. We wake up around 9 or 10 and when I turn around we are finishing dinner and thinking about the nighttime feedings. We've been tying to get out a bit so that we can get used to that before hubby goes back to work. Yesterday I took her out by myself for the first time, it was only an hour down the road to my mom's apartment but a solo trip nonetheless.
I will work on posting more pictures, I promise. There isn't much else going on in my life other than keeping Calli fed, clean, clothed and happy so the posts will probably be short.
Later peeps.
xo
S
Posted by Stefania at 10:38 AM No comments: