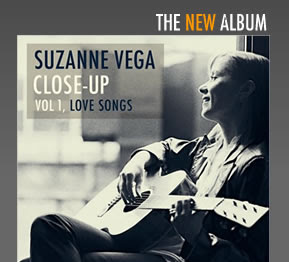 This is a long and twisted love affair.
I have ALWAYS been a fan of SV... as you can see by the title of this blog, I love her lyrics and own almost all her albums.
A few years ago... gosh it must be almost 6 by now, she had a concert at the casino near here. I really wanted to go but couldn't find a soul to go with. Sadly I had to miss it. I promised myself that that would never happen again.
Lo and behold she had a concert at a not so near here venue a few years ago and I asked my BF to go. We made all sorts of plans... take the day off to drive there, spend the night so we wouldn't have to drive back so late at night. I lost my job and still, the up and coming concert was a beacon in the dark. A few days before the concert I got an email from the ticket company saying that the concert had been canceled. My cry of despair rang out in the night. I was SO peeved.
This past Summer there was some talk of a trip to Europe... my mother wanted me to go with her, my nephew was making a voyage and needed some "guardianship" AND there was a concert in Europe. Really was this going to be chance? Nope... those plans sizzled fast.
A few months ago an email arrived in my inbox... A Suzanne Vega concert has been posted near you... I was nervously excited. Would this opportunity come my way again? So soon... I asked around... no takers. Really ... no one? One taker, but life got in the way and we never made plans.
Again this week an email graced my inbox. I'm so bitter by now... this is ridiculous... of course the only concerts in my 100mile radius are on nights that I go to school. Ugh. Seriously! My only consolation prize is that she has some new albums coming out and there are some available on her website, signed. Could I even... would I even...